Hi everyone, I’m trying to modify a Lightning McQueen toy car (battery: 6V, 9Ah capacity) and ran into some issues that hopefully someone might have insight on. Any help will be greatly appreciated.

Unlike the smaller Lightning McQueen toy car, the bigger version I got came with 2 motors (instead of 1) and a larger battery capacity. While trying to rewire the circuit to include a Big Red Button and a kill switch (toggle), I ran into overheating issues so I added in a relay component. Please see below for original and modified circuit diagram.

However, whenever I press the Big Red Button, the car does not run at all. Instead, the relay will make a buzzing sound and start vibrating/moving across the table. Has anyone used a relay and seen this happen before? I made sure all the connections were intact and wired correctly, the battery was fully charged, and the toggle switch was on. I’m not sure how to proceed with troubleshooting this issue. Does anyone have ideas on what I can try? 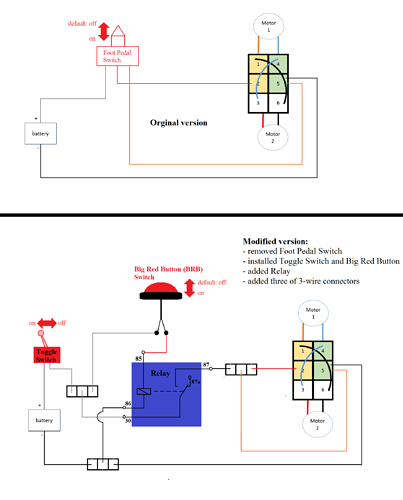 It looks to me like the modified version shorts battery and ground together at Pin 5.

Many of these cars short the motors when the footswitch is released, to provide braking. I think the original circuit you show has that. The modified circuit above does not support that feature. If you want to retain it, I can give you a circuit that will do so.

Thank you Doug! Appreciate the fast reply. I will try these suggestions and let you know how it works out.

As for the braking function provided by the footswitch in the original circuit, I believe the Big Red Button also provides braking when released from being pressed down because it’s default position also shorts the circuit.

Thanks for the save Doug. I was the one who gave Amy the somewhat hasty advice and misinformed wiring diagram at an event we were attending together. What I failed to understand (that I do now, thanks to you) is how to wire the relay correctly to take advantage of the regenerative braking mechanism. Normally when we modify our two motor vehicles we’re using MotherBox which connects directly to the motors and circumvents any regen braking mechanism … so I wasn’t taking that into account. Now, after a couple of coffees and drawing several pictures in many shades of ink, I can see how the circuit changes you recommended should work like a charm. In short … you rock

many hands make light work, & so glad we have each other’s backs when it comes to this stuff. Happy Friday to y’all

Hi Pete,
Thanks very much for checking and confirming the circuit suggestion. I am always a little uneasy suggesting something I cannot try here first, so your post was great to see.

Since we are talking about the braking, here are two more thoughts. I, too, almost always wire the cars as you apparently do, without retaining the braking. But it is actually a child-dependent decision – we have found it is better for some kids without braking, and better for others to retain it. I think the braking tends to snap their heads forward more when they release the switch. When they are in a harness and/or have weaker head control, that’s not what we want.

Another detail. Beyond braking, shorting the motors reduces a possibility that the motors will put higher voltage electricity into the car wiring when rotating without power applied, and / or create RFI / EMI. (They act like little generators.) I have never personally seen any bad effect from this, so I choose to ignore it. But I can see where it’s possible. Older cars sometimes put a resistor across the motors when power was not applied. That is a superior approach, and I bet they dropped it for cost-cutting.

Thanks again for the feedback!

Thank you so much Doug and Pete for your help!! You guys are awesome 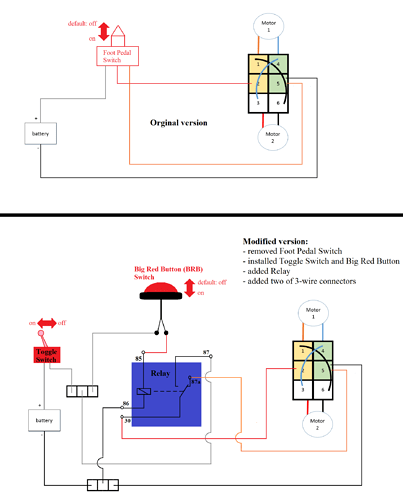 Congratulations! When do you place the car?

Nice drawings. What software do you use?

I think in a month or so!

Thanks Doug! I’m glad you think so. I actually just used Paint

1 Like
This site is powered by FIRST Robotics Team 1939 from The Barstow School in Kansas City, MO