Sometimes we have a car that goes too fast for the child, or starts with a jerk that scares the child. We then install a motor controller and that solves both problems. It was surprising how the controller would slowly accelerate to the speed where the potentiometer was set, giving a nice smooth ride. One caution. Some cars come with a non-standard noise control circuit on the motors, utilizing an NP electrolytic. Those are not compatible with this controller. We would just replace that with a standard circuit, but if you don’t want to do that you should check the motor first and avoid any cars with that circuit.

We bought ours on Amazon, the link is below. 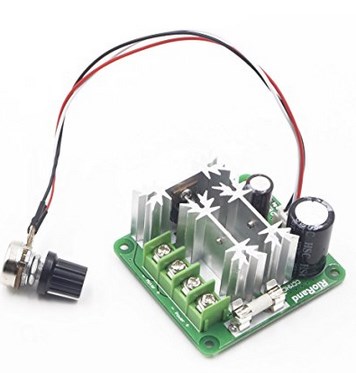 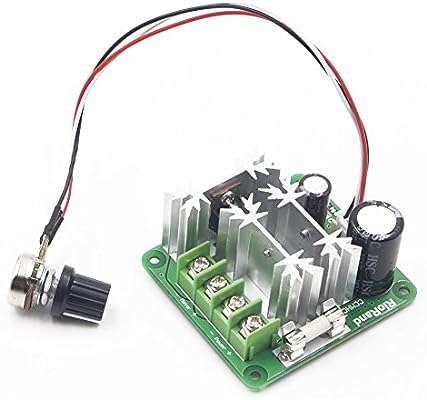 I have a kid who cries when the kill switch in his car is turned on (he’s happy as a clam sitting in it until he knows you’re turning it on) so I’d like to try this to see if it helps, but I don’t know how to connect it. The car is a small Lightning McQueen; wiring is as follows:

So, how would I insert the motor controller into that wiring scenario?

Here are the steps:

1) Confirm the polarity of the motor wires and terminals

This means confirm which wire attached to the motor terminals is positive and which is negative, because it is probably the opposite of what you would expect. This is the important step. You will need a multi-meter and a helper.

With the multi-meter set for around 20 volts, put the test leads (red and black) on the motor terminals. (Either lead on either terminal is OK to start.) Have the helper tilt the car and start it. Read the voltage. If it is negative (a minus sign (-) on the display), the test leads are backwards. Try it again with the test leads reversed. When you see a positive voltage, mark the wire and terminal where the Red test lead is connected with a + sign. That is the positive terminal on the motor, and the wire going to it has the positive voltage. (I usually mark this with masking tape so I don’t forget.) The other wire is negative voltage, and the motor terminal it connects to is the negative terminal.

One note. If you have any electrical experts around, they may be surprised to see that a red wire shows up as negative. But yes, this is the way the factory sometimes wires them and it is why you have to check.

This can be the hard part. I will give an example for the RioRand controller. If you use something different, you will have to tweak this. On the older McQueens, there is usually room for the controller on the floor of the motor compartment on the opposite side of the center post from the battery. The controller board has four holes drilled in the corners. I usually attach the motor controller to the floor of the car with #4x3/4” pan head sheet metal screws. However, don’t screw the controller down directly to the floor. Use standoffs between the controller and the car floor. I usually just use plastic craft beads. Then flip the car over and put thermal glue on the screw ends where they poke out below the car.

Then, there is the controller potentiometer (speed control). You want to mount it somewhere on the car body where the child can’t bump it. But the leads are only about 7” long. Usually I will mount it on the top side of the car just behind the rear seat edge. Drill a hole through the car body where you want it to go, then a second hole inside the near wall of the motor compartment so you can run the leads back into the motor compartment through that hole. The leads have a connector that you can pull off the motor controller so you can thread them through after you mount the potentiometer.

Note that the potentiometer has a small tab sticking up on the front face. You have to drill a second tiny hole near the first mounting hole you drilled. The tab has to go into the new tiny hole. The tab prevents the potentiometer body from twisting. If you don’t drill that second hole, the potentiometer will mount crooked. (I realize this is hard to visualize just from my text, so if you want a picture let me know.)

Depending on where you mounted the controller, the wires might not easily reach the controller. Don’t stretch them. You might have to splice some extension wires into the existing wires. Let me know if you need some suggestions on that.

Finally, glue the wires attached to the motor controller to the board and green terminal block with thermal glue so they don’t loosen.

Hope this is helpful. If you have any questions or need pictures, just let me know.

Hi Doug -
Thank you so much! Your directions make perfect sense. I will definitely need to make the wires longer in order to reach the motor controller; I can use wire nuts for this, correct? Also, I might need to make the wires between the board and the potentiometer longer. Can I do that with wire nuts? Or would soldering be better? Or is it best to find a place that works without having to extend the wires at all?

Your best option is to find a location where you don’t have to extend any of the wires, but I usually do have to lengthen the power wires. It’s best to keep them as short as possible, but adding a few inches of the same gauge wire is not going to hurt anything.

My strong preference for adding extension wires is to solder them and put heat shrink tubing on. But this has to be done by someone who really knows how to solder well, and most of our volunteers did not. A good solder connection is the most reliable and trouble-free; a bad solder joint is the worst.

It is possible to use wire nuts to add the power wire extensions if you can’t arrange to get them soldered well, as long as you can get them tight enough. We have had trouble with wire nuts long term if the volunteers didn’t get them tight.

There are also other ways to add wire extensions, but when compared to a good solder joint, every other approach has some kind of higher risk associated with it.

Hi Doug -
VERY helpful! Thanks!! Crossing my fingers that this helps my little friend not be so scared of his car

Update:
I successfully wired the controller & pot into the car and brought it to my little guy. Aaaaannnnd, he’s still scared of it, even when it’s moving really slowly

. His parents are troopers, though, and are committed to getting him used to it. I’m going to do this again for another of my kids and see what he thinks. Thanks for all the help!!

Hi Kathy,
First, congratulations on getting the controller to work. Now you have another option available for when needed. Sorry to hear the little guy is still unhappy with it. We may have another option available soon. Nick and I have been working on an Arduino-based controller timer that gives even smoother operation than the commercial controllers. Plus it can be programmed for any sort of speed limit and speed ramp-up that you want. Maybe that would make your little guy become comfortable with the car more quickly. This will be in an experimental phase for a while yet, but we would consider working with someone who could keep a close eye on it while in use, at least to start. Maybe the parents you are working with here would be candidates if they are really serious about this. I have a couple of videos of a prototype in operation, but Go Baby Go Connect will not let me post them on this site. If you are interested, send me an alternate email address and I can either email them to you directly or put them up on a Google Drive.
Best regards,
– Doug

Hi Doug -
That sounds great, but expensive. My program’s funding was cut for this next year, so there’s no money to buy anything. I bought the two motor controllers out of my own pocket because they were inexpensive, but I’m not sure how I feel about buying an Arduino-based controller. We do expect full funding next year so perhaps I can convince the higher ups at that time. Thank you for the offer, though!

Hi Kathy,
Oh, if you decided one would help, I’d just send you one when we have them ready. They will be cheaper to build than the commercial controllers – about $10 for the parts. That was part of the goal. I don’t intend to charge for them. But I assume for the child you are working with, there is still a lot the parents can do to acclimate him – pushing him around in the car without turning it on, etc. Let me know if you eventually need to try something like we are working on.
Best regards,
– Doug

Oh wow! In all the other builds I’ve seen that have Arduino controllers, the board itself is at least $100, so I kinda just assumed this would be the same

. I’m not sure if it’s the jerking or the fact that he’s moving himself through space (having never done that before) that scares him so I need to figure that out first. I will definitely let you know if it seems like your new board would help. Thank you so much!

Pat and I discussed this. Any possibility it’s the motor noise that bothers him? Those cars actually are pretty noisy (and therefore scary) for some kids, especially if the child is autistic. Maybe the parents want to see if he would tolerate some comfortable hearing protectors?

That’s a great thought! I haven’t noticed any other auditory sensitivities but headphones are worth a try. Thanks!

I am looking into Arduino-based controller options to slow down the initial acceleration of a car. The problem I am running into is that the car only has a 6V battery, and from what I have read online arduino’s need at least 7V. Have you run into a similar problem? Do you have any suggestions?

Hi Molly,
Yes, we have hit this one too. In practice, one way you can encounter such a problem is if the parents let the battery run down, and then if the child stalls the car the voltage to the electronics can drop. This is one thing to test before you release the car, make sure it just shuts down and doesn’t do anything unexpected.

You have several options. First, there are indeed Arduinos that operate at lower voltages. I will try to attach some scans from Make’s Guide to Boards and you can see some where the input voltage can be as low as 3.7 volts. Maybe one of those will meet your needs.

If none of those boards are satisfactory, you can power just the Arduino board (not the motor controller board) from a separate small battery. Either wire in a separate on/off switch for that, or use a relay to turn it on when they turn the car on.

You can also buy a voltage step-up board that will increase the voltage from what the battery is supplying to what the electronics needs. I will try to attach a scan of one such board, you can read what it will do. There are a lot of these available, this one costs $7.

Hope this is helpful! 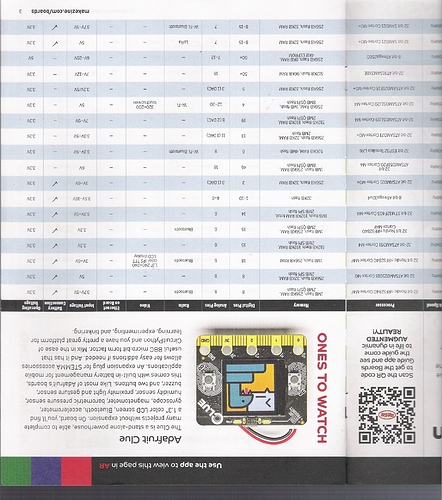 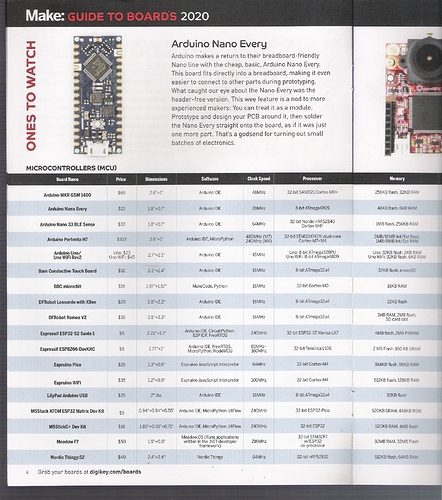 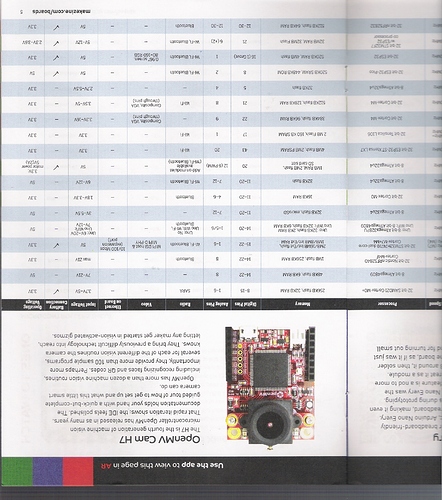 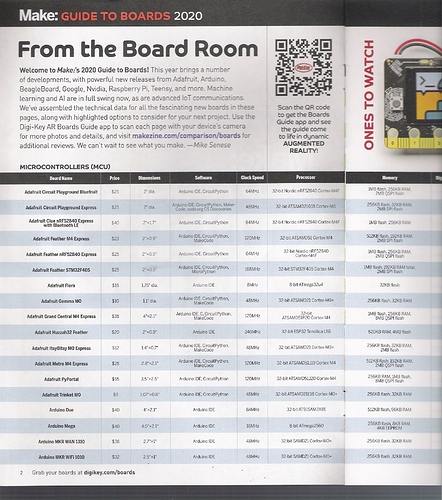 Thank you for all of these suggestions! I will look into all of them further, but I think at least one of these will work for use!